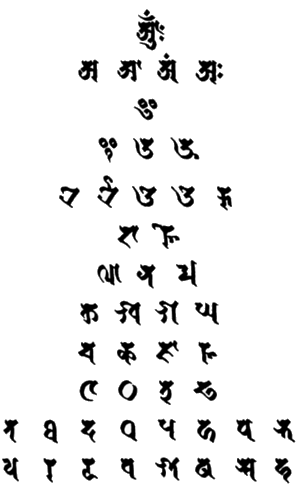 This is background info for a calligraphy project that started as an idea for a gift to my preceptor. It is influenced by the Mahāvairocana Sūtra, and shows the Sanskrit alphabet in the shape of a stupa. The stupa has six main parts, related to the six great elements which make up everything: earth, water, fire, air, space, and consciousness.

At the top of the image is the syllable āṃḥ. The main part of the syllable represents ,space, while the nada-bindu on top is consciousness. āṃḥ, by combining elements of the different forms of a (i.e. a ā aṃ aḥ) into one syllable, represents the fruits of the four stages of the Buddhist path according to the Mahāvairocana Sūtra:

"For enlightenment a. For practice: ā. For Perfect Enlightenment: aṃ. For Nirvāṇa: aḥ" - Mahāvairocana Sūtra

Through contemplating śunyata one attains bodhicitta, which is symbolised by a. What follows is application or caryā which is associated with ā. Application leads to aṃ : accomplishment or sambodhi. Having fully accomplished the spiritual path one reaches aḥ, nirvāṇa.

On the next level, in the shape of a upturned crescent moon, symbolizing the element air or wind, are the four variations of a - a ā aṃ aḥ - seperately. From the unawakened point of view we must move through the four stagesto attain by contemplating śunyata the result is bodhi, which is symbolised by a. What follows is application or caryā which is associated with ā. Application leads to aṃ accomplishment or sambodhi. Having fully accomplished the spiritual path one reaches aḥ, nirvāṇa.

The the nasals - ṅa ña ṇa na ma - form a half-circle symbolizing water. In the Mahāavairocana Sūtra the nasals represent the other syllables of that articulation: so ṅa stands for ka kha ga gha as well.

Finally the rest of the consonants - ka kha ga gha etc - form a square representing the element earth and a plinth on which the stupa rests.

According to the Mahāvairocana Sūtra the alphabet can be used as the main focus of sadhana or spiritual practice. The preparatory stage of practice begins with contemplating aspects of the Dharma. The individual letters are linked to words which can be expanded into sentences of doctrine regarding the nature of experience. The letters are known as Dharma Doors. This practice goes back to the Lalitavistara Sūtra, but is probably best known in the Perfection of Wisdom Scriptures. So for instance the Pañcaviṃśatisāhasrikā Prajñāpāramita Sutra (The Perfection of Wisdom in 25,000 lines) says:

The Mahāvairocana Sūtra takes this further. By contemplating śunyata in this way, called the cultivation of bodhicitta, we gain insight into the nature of the phenomena of experience - which is called bodhi in the Mahāvairocana Sūtra. We do this until there are clear signs of the arising of bodhicitta. Once the bodhicitta has manifested in us we begin to imagine ourselves embodying the insight by visulizing the syllables arranged around our body, and then when we are well established in this, disolving the letters, since they too are śunya. This is the caryā or application phase or practice and the result is sambodhi or accomplishment.

The final goal of all this, the horizon over which we cannot see is nirvāṇa, and having attained sambodhi in this life we must not rest on our laurels but focus on helping all beings to be free from the bonds of samsara.

One well known application of alphabet in Buddhist practice is in the mantra of Mañjuśrī. Part of Mañjuśrī's mantra - a ra pa ca na - is the first five letters of the Gāndhārī alphabet which served the same mnemonic purpose in earlier Buddhist texts such as the Perfection of Wisdom in 25,000 lines.