Then the Bhagavat Vairocana entered a samādhi endowed with the matrix of the pure adornments of the inconceivable embodiment of the Tathāgata, the transformation of the ground of power that is unimpeded in the three times. 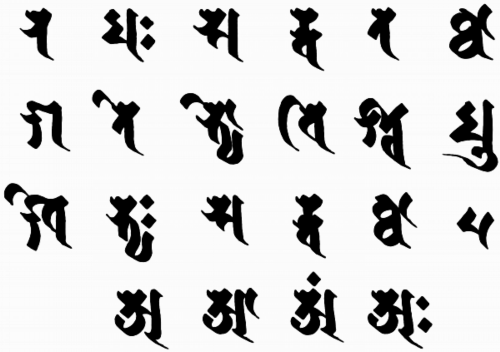 Hodges translates: Salutations to all the Tathāgatas, who are multifaceted, omnipresent! a ā aṃ aḥ. I would prefer to translate viśva-mukhebhyaḥ as "ever-present doors", because of the relationship to the Wisdom Alphabet in which the letters are described as mukhaḥ sarvadharmāṇāṃ, "a door to all dharmas".

Vairocana enters a samādhi in order to utter these four aspects of 'a'. According to Buddhaguhya, on the absolute level this "reveals suchness by way of the letter 'a'. On the relative level it indicates that the thirty-two marks of a Great Being arise from the letter 'a'." (Hodge : 172-3) Buddhaguhya relates the 32 consonants of the Sanskrit alphabet to the marks of the Mahāpuruṣa, although in fact there are 33 consonants.

The four apsects of 'a' have been mentioned previously in the General Mantra Treasury (iv.15. Hodge : 162) where they stand for the four stages of the path:

The Sanskrit terms are: bodhi, caryā, samyak-sambodhim and nirvāṇa. Although "Enlightenment" is the usual translation for bodhi, from the context I think here it is refering to bodhicitta. In the MAT bodhicitta is gained by contemplating śunyata. Bodhicitta is the preliminary for the rest of the system of practice (caryā) which lead to Awakening. 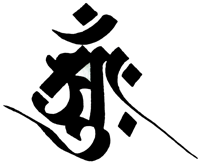 The seed syllable āṃḥ (left) combines all of the four variations, and is sometimes used as the bīja mantra of Mahāvairocana.

In an essay entitled The Essence of All Mantras I have speculated that the idea that everything arised from the letter 'a' is related to the origins of the Wisdom alphabet in the Khāroṣṭhī script because it not only includes an inherent short 'a' vowel with consonants, but also only has one character for vowels which is a when unadorned and becomes other vowels when diacritic marks are added.