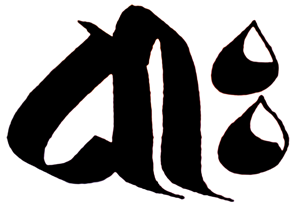 dhīḥ is the seed syllable of perfect wisdom or prajñāpāramitā. The syllable comes from the old Vedic root dhī, incorporating a range of meanings including: to perceive, think, meditate, or reflect; and understanding, intelligence, knowledge and wisdom. dhīḥ is the nominative or vocative form of the noun: it is a name, or an address.

Note that in John Stevens' book he writes dhiḥ with a short i, but I am reasonably sure that the long ī is correct. This example is for comparison.

The Vedic concept of dhī   "refers to the visionary's ability to see the gods' and goddesses' presence in the world and to respond to that divine company through imagainative songs of praise sung suring sacred ceremonial rites." - Mahony, W.K. 1998. The Artful Universe

The seed syllable dhīḥ is associated with Mañjuśrī and with Prajñāpāramita. Gelug monks invoke Mañjuśrī by shouting dhīḥ! after they pose a logical problem during a formal debate.

In some Mañjuśrī sādhanas one recites dhīḥ as many times as possible in one breath.

See also my essay:
The Seed Syllable of Perfect Wisdom.

The syllable dhiḥ is sometimes combined with mma which stands for Mañjuśrī (although we would expect maṃ here) resulting the complex syllable is dhiṃmma. This complex syllable is associated with the Prajñāpāramitāhrdaya or Heart Sutra. As with dḥīḥ John Steven's book (and other Shingon sources) have dhiḥ with the short i.

Read my essay on the
seed syllable dhīḥ
on the Jayarava Rave.