The practice of creating mnemonics as aides-mémoire is an essential aspect of preserving oral texts such as the Buddhist canon. Mahāyana Buddhists created a special mnemonic out of the alphabet. Each letter stands for a word, and each word can be expanded into a sentence. Each sentence is intended as a meditation subject. Here is the sentence for a = anutpanna: 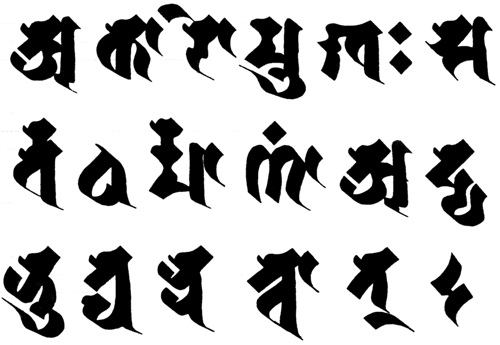 The last character in this mantra calligraphy is a fullstop - added to give it symmetry.

In the large Perfection Wisdom Sutra one is instructed to meditate on the truth symbolised by the letters in turn, and to contemplate how they all point towards the same reality/truth (Sanskrit: sat).

"Sons of good family, may you become skilled in the consumation of the letters! May you become skilled in one letter, in two letters, etc. to: in forty-two [sic] letters! May you through these forty-two letters come to a state which has moved away from everything. May you meditate on the 42 letters as contained in one letter, and may you meditate on one single letter as contained in 42 letters!”

Conze, 1975, The Large Perfection of Wisdom Sutra. p.587 (=Pañcaviṃshatisāhasrikā chp.72, VIII 5.3). [Note that there are 43 letters in the alphabet in this Sūtra, and that other versions have 44, but that here the sūtra definitely says 42.]

There is more on the Arapacana as a meditation practice on the Wisdom Alphabet page in visiblemantra.org.

The alphabet referred to is the Gāndhārī alphabet rather than the Sanskrit alphabet, which usually is considered to have 50 including one conjunct kṣa. For more information on this see the links below.

By the time of the Hevajra Tantra (10th century) the first sentence has become, with the addition of standard framing bījas, a mantra in it's own right

The cycle of White Tārā sadhanas also use the oṃ akāro mukhaṃ… mantra. It is used when making torma offerings and in a practice Stephen Beyer calls The Four Mandala offering to Tārā. It also occurs in some Vajrayogini sadhanas.

Part of the mantra of Mañjuśrī - a ra pa ca na - is the first five letters of the Gāndhārī alphabet which was used in the Perfection of Wisdom in 25,000 lines as the framework for the mnemonic. Later texts used the Sanskrit alphabet. For more information on Mañjuśrī's mantra see also my blog post: The Mystical ARAPACANA Alphabet

The Gāndhārī alphabet in the Perfection of Wisdom in 25,000 lines is in the order:

These is more information about arapacana on the Mañjuśrī page on this website.

For more on the theory that the arapacana alphabet is Gāndhārī see: Richard Salomon. New Evidence for a Gāndhārī Origin of the Arapacana Syllabary. Journal of the American Oriental Society, Vol. 110, No. 2 (Apr - Jun, 1990), pp. 255-273.

These texts are mentioned on this page and provide the background for the calligraphy:

The Large Perfection of Wisdom Text

The Concealed Essence of the Hevajra Tantra