The letter 'a' is the first letter of the Indic alphabets. It is the short 'a' sound that we find in the English word but (= ə in the IPA Alphabet). In Indic languages each consonant has an implied short a attached to it, so the consonants are ka, kha, ga, gha, etc. So 'a' is said to be present in each consonant, and to be the mother of all of the letters. If you open your mouth and breath out the sound is 'a'.

Learn to write the 'a' seed syllable in Siddhāṃ.

In Sanskrit if you add 'a' as a prefix it makes a word have the opposite meaning: vidyā is knowledge; avidyā is ignorance. So 'a' came to represent the essence of the Prajñāpāramitā, or Perfection of Wisdom, tradition. This idea was explicitly expressed in the Sutra of the Perfection of Wisdom in One Letter, that letter being 'a'. In this tradition phenomena are said to neither absolutely exist, nor non-exist - they arise in dependence on conditions, and cease when those conditions cease. This is similar to a Hindu aphorism about reality which says: not this, not this. Conceptual categories such as existence and non-existence are not able to encompass the true nature of phenomena.

Another possible explanation for the statement "I declare that A is the essence of all mantras" is in my essay The Essence of all Mantras.

The esoteric meaning of 'a' is anutpāda or unarisen. This is a reminder that because all things arise in dependence on causes that nothing is permanent, and that nothing has any essential characteristic outside of those causes.

As a bīja 'a' is seed syllable of Vairocana in the Garbhadhatu Mandala, and more generally of Mahāvairocana as the Dharmakāya Buddha. Meditation on the syllable 'a' is a central practice in Shingon Buddhism.

Seed-syllable a in Tibetan Uchen script

Comparing the Tibetan Uchen 'a' with the Siddhāṃ one can see that they contain the same graphic elements with minor differences. This is because they both derive from the same earlier script, which was related to the Brahmi script which was one of the scripts used by Kind Aśoka to write his famous pillars. The diagram below shows how the two scripts are related by showing hypothetical intermediates.

Uchen and the other Tibetan scripts are also related to the Lantsa or Ranjana script which Tibetans still use to write Sanskrit sometimes - see left. Robert Beer, the well known artist, has created a decorative 'a' which is for sale as a postcard on this website.

You can read about the meditation on the syllable 'a' on James Deacon's Reiki Website, and also in the book Shingon : Japanese Esoteric Buddhism, by Taiko Yamasaki, which is available from the Shingon Buddhist International. Institute

In the Mahāvairocana Abhisaṃbodhi Tantra the four basic variations on the letter a (ie a ā aṃ aḥ) are linked to the four stages of practice: bodhi, carya, saṃbodhi, nirvaṇa. These are sometimes pictured as a maṇḍala with the four syllables combined as āṃḥ in the centre. 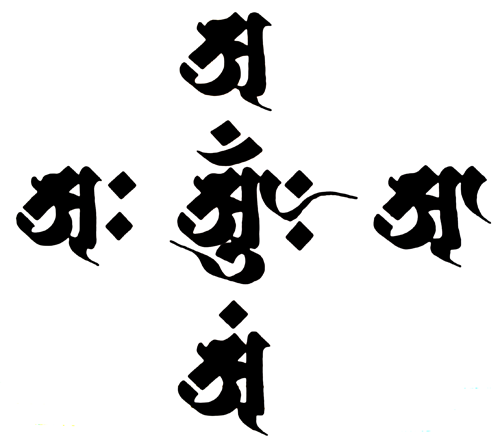 I declare that A is the essence of all mantras, and from it arise mantras without number; and it produces in entirety the Awareness which stills all conceptual proliferations.
- Kūkai